Recently, Prof. YANG Xueming and SUN Zhigang from the Dalian Institute of Chemical Physics (DICP) of the Chinese Academy of Sciences (CAS) and Prof. WANG Xing'an from the University of Science and Technology of China of CAS, for the first time, revealed the effects of electronic angular momentum to a chemical reaction.

The related finding was published in Science on Feb. 25.

A chemical reaction could be understood in detail at the quantum state-resolved level through the combination of molecular crossed beam experiments and theoretical quantum molecular reaction dynamics simulations.

In the study, the researchers developed molecular crossed beam apparatus with threshold ionization velocity map imaging technique, which enabled them to probe the scattered product with high angular resolution with quantum rotational-state recognition.

The left circles are the experimental measurement of the product state-resolved differential cross sections of the F+HD reaction, the right image is the related partial-wave resonance wave function of the reaction (Image by WANG Ransheng)

There is distinguished reactive scattering quantum resonance in the F + HD (the Fluorine atom with the HD isotope of the H2 molecule) reaction. With this feature, the scientists thought that the role of the electronic angular momentum of the F atom in this chemical reaction would be recognized.

They found that, by considering the electronic angular momentum, the single partial wave structure would split into four-fold partial wave resonance structure, which was capable of changing the angular distributions of the chemical product.

The energy of the electronic angular momentum is much smaller than the rotational energy of a diatomic molecule. Its influence to a chemical reaction is subtle and difficult to detect.

This work "measures the transition-state structure with previously unattainable sensitivity," said Dr. Peter Rakitzis, a professor of the atomic, molecular, and optical physics of the University of Crete in Greece, in his perspective on the same volume of Science magazine.

Is the Simplest Chemical Reaction Really That Simple?

New research by scientists at the Dalian Institute of Chemical Physics has shown, surprisingly, in the simplest, well-studied reaction, there is still uncovered mechanism. It leads to clear quantum interference and verifies again that Nature does "play dice". 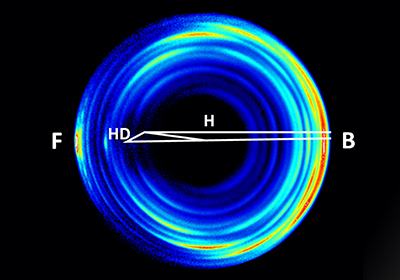 Prof. YANG Xueming from Dalian Institute of Chemical Physics and his co-workers observed the "corona" phenomenon in a chemical reactive scattering for the first time. They used the self-setup molecular crossed beam velocity map imaging apparatus, which has the highest res...