Launched in July 2018, ALivE is a computer-based tool to support ecosystem-based approaches to climate change adaptation, or ecosystem-based adaptation (EbA) project managers and practitioners in organising and analysing information to plan effective EbA options within a broader EbA planning process.

Accompanying the tool, ALivE user manual provides the users with detailed guidance on applying ALivE as part of the EbA planning process. In addition to step-by-step instructions for using the tool itself, the manual provides a framework and methodologies for collecting and organising the information required to use ALivE, as well as guidance on identifying entry points for integrating EbA into policies and planning processes.

The user manual had been produced in English, French, Nepalese and Spanish languages. The tool has also been widely promoted within the EbA South pilot countries (Mauritania, Nepal and Seychelles) and beyond, resulting in real application in many EbA initiatives in various countries, including those in South America and Southeast Asia.

ALivE is one of the most relevant and updated tools for planning of Natural based Solutions, called by the UN Climate Summit. It is a rapid qualitative assessment technique that can be applied in any ecosystem types.

ALivE is a key “Ecosystem-Based Adaptation through South-South Cooperation (EbA South) Project” deliverable, developed in partnership with the International Institute for Sustainable Development (IISD) and the International Union for Conservation of Nature (IUCN).

As part of the EbA South Project Steering Committee, the Chinese Academy of Sciences (CAS) offered financial support to further translate the ALivE user manual into Chinese and Russian languages in May 2019, aiming to encourage more extensively application of the tool in China and Russian-speaking countries.

The funding support came from the Alliance of International Science Organizations in the Belt and Road Region (ANSO) — a non-profit, non-governmental and international scientific organisation jointly initiated by CAS.

The ALivE EbA planning tool and its user manual are now available for downloading on IISD website and EbA South website.

Since 2013, EbA South has been executed by the National Development and Reform Commission of China, through the Institute of Geographic Sciences and Natural Resources Research of CAS. It is funded by the Global Environment Facility (GEF) and implemented by the United Nations Environment Programme (UNEP). The project’s overall goal is to assist vulnerable communities in Africa and Asia-Pacific to adapt to the impacts of climate change, by improving their capacity to plan, implement, finance, research and legislate in support of EbA. 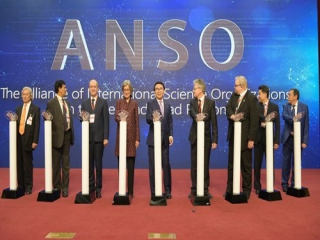 Scholars from Sri Lanka and Nepal slammed accusations that China uses the Belt and Road initiative for political gains, saying that the initiative is merely about economic and scientific benefits.

A Belt and Road international science organisations alliance was launched on Sunday in Beijing with the aim of tackling major scientific challenges such as climate change.