Exploring dominant few-body correlations in many-body systems is one of the main tasks of modern physics, and the presence of exotic few-body bound states offers an efficient perspective to uncover the according few-body correlation in the many-body environment. In this aspect, the Borromean binding clearly belongs to such a case, where only three subjects are bound together while any two of them are unbound, analogous to the structure of Borromean ring. Theoretical studies have shown the Borromean trimer can be supported by fine-tuning the shape and strength of pairwise potential or by modifying the single-particle dispersion.

Given the stringent requirement for its occurrence in small clusters, whether the Borromean binding can be extended to many-body systems due to collective effect is an interesting yet challenging problem. Addressing this problem will help to build up a bridge between the collective many-body effect and the quantum few-body correlation, thereby offering a new route for tackling the complicated many-body problems in strongly correlated systems.

On the other hand, droplet represents a typical many-body bound state and droplet phase has regained great attention in ultracold atoms, and it has been observed in dipolar gases and the alkali two-species boson mixtures. Typically, droplet holds a negative energy and zero pressure, and thus can be self-bound and stay in equilibrium with the vacuum. Its mechanism lies in a critical balance between the mean-field attraction and the Lee-Huang-Yang repulsion from quantum fluctuations. Then, an interesting question here is, will droplet be stable under multi-component? And even further, can it support the intriguing Borromean binding?

Recently, Prof. CUI Xiaoling from the Institute of Physics of the Chinese Academy of Sciences (CAS), together with the postdoc MA Yinfeng and phD student PENG Cheng, has investigated the stability of quantum droplet in three-component boson mixtures and examined the possibility of Borromean binding therein.

By analyzing the mean-field stability of this system under density fluctuations, the researchers found that the stability regime of three-component system is always larger than that of two-component subsystems, which means that the former can undergo mean-field collapse more easily than the latter. Its physical origin lies in the enhanced attractive force mediated by the density fluctuation of the third component. Such additional force intensifies the mean-field collapse of three-component system and facilitates the formation of quantum droplet after incorporating the repulsive force from Lee-Huang-Yang corrections.

By definition, it is the Borromean droplet, where only three-component bosons can form the self-bound state while any two components cannot. They have identified the region of Borromean droplet in the phase diagram.

Moreover, another interesting phenomenon was that outside the Borromean region, the three-component and two-component droplets can coexist in the form of phase separation, as manifested by the wedding cake structure in their density profile.

These results demonstrate that the three-component boson mixture can exhibit much richer physics than the two-component ones. This is the first study to extend the Borromean binding to the many-body world, and it has shown the power of many-body collective effect in engineering bound states with a diversely fascinating structure. The work has been published recently in Phys. Rev. Lett.

In addition, the researchers have investigated the stability of quantum droplet under a uniform confinement. They showed that the confinement-induced boundary effect can be significant when increasing the atom number or reducing the confinement length, which destabilizes the quantum droplet towards the formation of a soliton bound state.

This study reveals the competition and coexistence of different bound states (droplet and soliton) in quasi-low-dimension, which can serve as a theoretical guide for detecting related phenomena in realistic experiments in near future. Relevant study has recently been published in Phys. Rev. Research.

Fig.1. Borromean ring: only three rings can be linked together while any two of them are unlinked. (Image by IOP)

Fig. 3. Phase diagram in the parameter plane of particle number and interaction strength. The blue area marks the region of Borromean droplet. Below and above this region are, respectively, the gas phase and the droplet-coexistence phase. (Image by IOP)

Fig. 5. a. Illustration of confinement-induced bound effect: when increase the particle number or reduce the trap length, the droplet can become unstable when its size is comparable to the trap length. b. hase diagram in the parameter plane of particle number and trap length. The blue and white areas marks, respectively, the droplet and soliton regions, and the gray area is the region when these two states can coexist with each other. (Image by IOP)

Droplet under confinement: Competition and coexistence with a soliton bound state 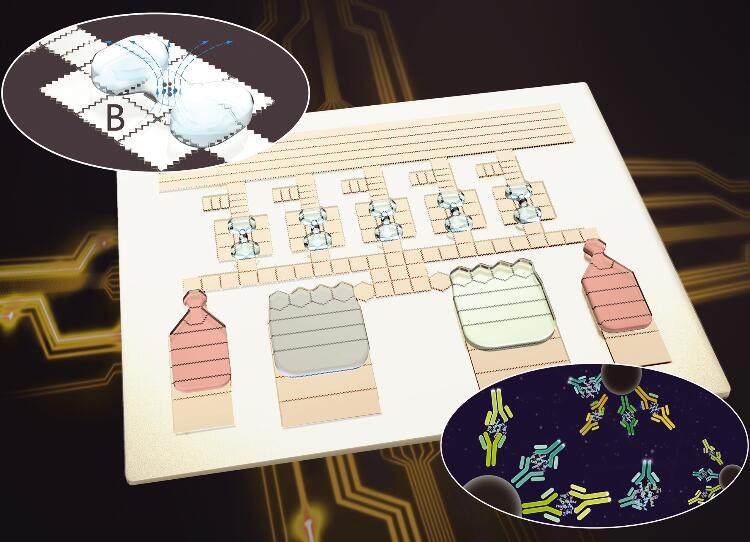 Research group led by Prof. WANG Jianjun at Institute of Chemistry of the Chinese Academy of Sciences (ICCAS) made progress in the guided self-propelled transport of microdroplets. By introducing anisotropic micropatterns on a superhydrophobic surface, they demonstrated f...