The Mesoproterozoic interval, postdating the Great Oxidation Event, is considered to be an interval of relative stasis in terms of global tectonics, climate states, and marine geochemical conditions, particularly with regard to the low variance of carbon isotopes.

As a result, this interval is referred to as the "boring billion", although the biosphere changed considerably during this time with the evolution of red and green algae, fungi, and calcifying cyanobacteria. In addition, stromatolite abundance and diversity in the oceans more than doubled in the Mesoproterozoic. The "boring billion" may be, in fact, not "boring".

Recently, researchers led by Prof. CHEN Jitao from the Nanjing Institute of Geology and Palaeontology of the Chinese Academy of Sciences (NIGPAS) and their U.S. colleagues have been working on the well-preserved Mesoproterozoic strata of the Helan Mountains in the western margin of the North China Block (NCB).

The researchers reconstructed the depositional history of a coarse redbed succession, analyzed a diverse suite of carbonate facies including remarkably well preserved stromatolitic assemblages, and provided carbon and oxygen isotopic profiles for these strata.

They also presented the first recovery of trilobites from Cambrian strata at this site demonstrating the very specific age of the overlying strata, and provided detrital zircon geochronological data for a suite of samples collected from Paleoproterozoic basement, Mesoproterozoic strata, and overlying Cambrian rocks.

The study suggested that the significant spatial distribution of approximately age-equivalent strata of the Mesoproterozoic Wangquankou carbonate in the NCB were most likely deposited on stable carbonate platform, rather than in an aulacogen.

Carbonate carbon isotopes and detrital zircon ages provide a maximum depositional age of ~1610 Ma and prior to 1000-1200 Ma for the Wangquankou Formation.

Detrital zircon geochronologic data also showed a consistent provenance throughout the Mesoproterozoic section, and for both Middle Cambrian and Middle Ordovician strata, which could suggest a remarkable paucity of major igneous events in this western part of the NCB over a considerable time span (approximately 1000 Ma).

The work provides fundamental basis for future studies on diverse stromatolites and biogeochemistry of the Mesoproterozoic.

Diverse Mesoproterozoic stromatolites of the Wangquankou Formation (Image by NIGPAS) 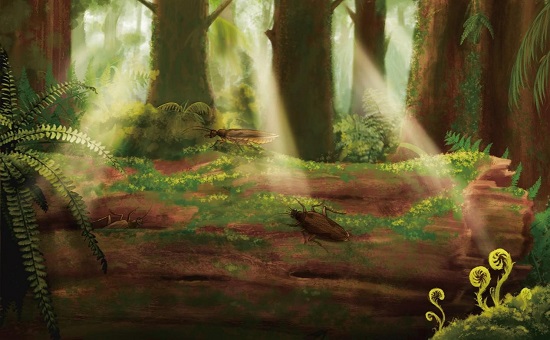 Researchers from the Nanjing Institute of Geology and Palaeontology proposed that the Umenocoleidae is likely a specialized taxon of Dictyoptera, sister to Alienoptera. The beetle-like appearance is a result of convergent evolution.