Increased use of trees in agriculture can lead the way towards a transformation of the global food system, according to a new study released in May. Scientists have found that even small incremental increases in global tree cover on agricultural land could provide short-term respite to carbon accumulation in the atmosphere, benefiting the livelihoods of smallholder farmers, biodiversity, ecosystems, and ecosystem services.

Building on years of work quantifying the extent, geographic distribution, and carbon mitigation potential of agroforestry, the study- led by scientists from the Kunming Institute for Botany of the Chinese Academy of Science (KIB/CAS), the Centre for International Forestry Research-World Agroforestry (CIFOR-ICRAF), The Nature Conservancy, and the Euro-Mediterranean Centre of Climate Change (CMCC)—is a clarion call to policymakers and institutions to promote the widespread implementation of agroforestry practices to mitigate the effects of climate change, while bolstering ecosystems, restoring degraded land and enhancing food security.

Published in Circular Agricultural Systems, the study represents the latest iteration of research on agroforestry, and its potential for carbon mitigation, over a 15-year period of interdisciplinary collaboration.

"Recently, there has been growing recognition in the land-use sector about the role of agroforestry to bolster mitigation efforts and strengthen small farmer adaptive resilience," said Robert Zomer, lead author of the study. "Trees on farms are now seen as the road forward for transitioning to improved agricultural systems with lower carbon footprints and environmentally sound practices."

"The opportunity to achieve beneficial outcomes for both conservation and food production by increasing tree cover on farms and in farming landscapes, including building resilience and soil health benefits, cannot be overstated," said Deborah Bossio, lead scientist at the Nature Conservancy.

"This recent report noted a discrepancy in anthropogenic land-based carbon accounting between the numbers countries submit in their national GHG inventories and what global modelling assumes," said Meine van Noordwijk, lead scientist at CIFOR-ICRAF, "suggesting the need for finer representation of trees outside forests. The updated dataset we present here helps address this gap in the literature."

Agricultural area with tree cover above and below the median tree cover value, within each grid cell's respective bioclimatic strata, i.e., carbon and aridity zone combination. (Image by KIB)

The researchers used updated carbon density maps to estimate biomass carbon present on agricultural land. It then posed the question: how much additional carbon would be sequestered if tree cover were increased? Two ecologically reasonable land-use scenarios were generated to answer this question.

The first scenario modelled changes in biomass carbon if just small incremental changes were adopted. "Incremental changes" were defined as practices that increased tree cover within existing or slightly modified agricultural systems, such as adding trees to field edges, along roadsides and canals, or as windbreaks and hedgerows.

The second scenario modelled changes in biomass carbon if systems change was adopted. "System changes" were defined as wide-scale adoption of agroforestry or other practices that integrate trees within the production system.

Incremental change in existing agricultural landscapes increased biomass carbon from 4-6 PgC (petagrams of carbon), and up to 12-19 PgC for a systemic change to tree-based systems. Increasing tree cover on agricultural land by just 10% globally, that is, by 1% per year for the next ten years, would sequester more than 18 PgC. By comparison, aboveground losses due to tropical land use conversion have been estimated at 0.6–1.2 Pg yr-1, with net emissions from land use, land-use change, and forestry for the year 2020 estimated to be 1.6±0.7 PgC yr-1.

Given the numerous ways to integrate trees and shrubs with crops and/or livestock, agroforestry practices can be implemented around the world. The researchers also used geospatial modelling techniques to show which regional bioclimatic conditions were most suitable to increasing tree cover on agricultural land. They concluded that South America, Southeast Asia, West and Central Africa, and North America had the most potential to increase biomass carbon given their large land areas and tropical/humid conditions that facilitate plant growth.

"Increasing on-farm tree cover is not a panacea for runaway carbon emissions," said XU Jianchu, corresponding author of the study, "however, it can help blunt the most severe effects short-term while laying the groundwork for future political and financial support, as part of the long-term transformation of our global food system." 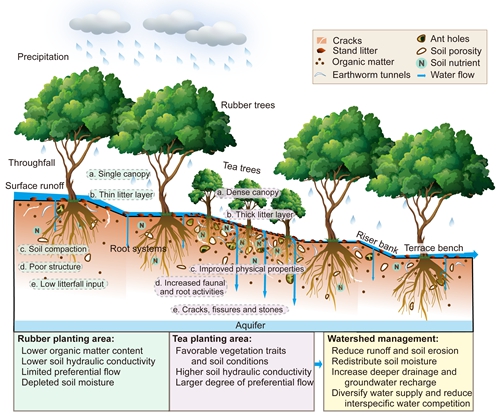 Researchers from Xishuangbanna Tropical Botanical Garden (XTBG) conducted a study to determine the hydrological functions of rubber agroforestry systems and the role of intercropped species. They selected a rubber-tea agroecosystem and investigated the variation of soil i...

Agriculture and land-use change account for about 24% of the world's greenhouse gas emissions. Agriculture needs to reduce its climate footprint. A recent study jointly conducted by XU Jianchu's group at Kunming Institute of Botany of Chinese Academy of Sciences, and rese...