China is rich in coal resources but has comparatively limited crude oil and natural gas. Therefore, conversion of coal to clean liquid fuels, which are mainly synthesized by crude oil, has received much attention in China.

A research group led by Prof. DING Yunjie and Prof. ZHU Hejun from the Dalian Institute of Chemical Physics (DICP) of the Chinese Academy of Sciences (CAS) and their collaborators developed the activated carbon-supported Co catalysts to produce clean liquid fuels from syngas with high selectivity. Using these catalysts, they have realized industrially synthesis of 150 kt/a of clean liquid fuels from syngas derived from coal in slurry-bed reactors in Yulin, China.

The catalyst test showed that at the industrial facility's full load, the syngas' total conversion exceeded 98%, the selectivity of methane was less than 7%, and that of C3+ hydrocarbons/oxygenates exceeded 92%.

Fischer-Tropsch synthesis (FTS) is the most versatile process for converting syngas into various chemical products. Traditionally Co-based catalysts have poor selectivity of liquid which hinders their industrial applications.

The newly-developed Co-based catalysts were supported by carbon materials, leading to a high FTS activity, high C3+ selectivity, and good stability. Moreover, the catalysts could be recycled by the combustion method with no solid wastes.

"The direct conversion of syngas into clean liquid fuels using carbon material supported by a Co-based catalyst can be accomplished at an industrial scale in China, thereby creating more opportunities for clean and efficient use of coal resources," said Prof. DING.

Researchers from the Dalian Institute of Chemical Physics and their collaborators proposed a new method to realize photocatalytic conversion of biopolyols to syngas at room temperature with high efficiency. 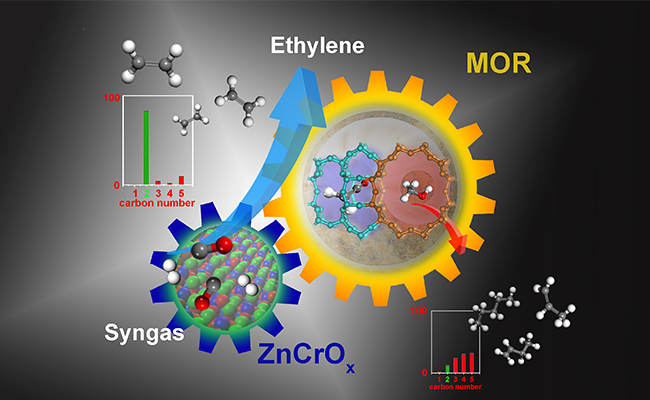 A research team led by Prof. PAN Xiulian and BAO Xinhe in Dalian Institute of Chemical Physics designed a new bifunctional catalyst, which could achieve the syngas conversion to ethylene with a high selectivity. Researchers focused on catalytic conversion of syngas to hig...