How Does Climate Change Affect African Holoparasitic Plants and Their Hosts?

Climate change is expected to affect species and ecosystems worldwide, forcing species to either adapt or shift their range. Forecasting the impact of climate change is key to developing effective conservation and management plans to preserve the current biodiversity and prevent widespread extinction.

Hydnora species are root holoparasitic flowering plants consisting of approximately eight species endemic in Africa and the Arabian Peninsula. They can be utilized as medicines to treat a variety of diseases and, as part of the world flora, they also play an important role in ecological functions. However, no comparative study has examined the possible effects of global climate change on the distribution of holoparasitic plants involving their obligate host.

In order to investigate the current and the future potential effects of climate change on Hydnora species, researchers from the Wuhan Botanical Garden of the Chinese Academy of Sciences simulated the potential distribution and range changes for H. abyssinica and H. africana for the current baseline period and the future (2050 and 2070) under two representative concentration pathway scenarios (RCP4.5 and RCP8.5).

The future habitat projection revealed smaller and fewer favorable climatic zones for the two Hydnora species with varying degrees of condensation: a 41%-64% contraction for H. abyssinica and a 12%-28% contraction for H. africana. The less broadly and more locally confined distribution of H. africana was estimated to experience less drastic changes in future scenarios.

Though climate change affects the host and the parasites, the parasites face a serious threat of extinction because of their host plant reliance. Except for Vachelia Karroo, V. xanthophloea, and Euphorbia gregaria, the host plants' distribution might be less affected in the future scenario. The future distribution of the host species and the respective parasitic species will only partially overlap.

This study could serve as a cornerstone for future endeavors to reveal more about the ecological and environmental requirements for these unique plants. Conservation measures and public awareness are highly required for the Hydnora species.

The work was published in the journal of Ecological Informatics entitled "How vulnerable are holoparasitic plants with obligate hosts to negative climate change impacts?", and it was financially supported by the Hubei Provincial Key Research and Development Program and the Sino-Africa Join Research Center of CAS.

Maps showing projected future climatic scenarios and estimated putative distribution ranges for H. abyssinica (A) and H. africana (B) in RCP4.5 and 8.5 for the years 2050 and 2070. (Image by WBG)

Percentage reduction in change distribution for the Hydnora and host species using two RCP Scenarios 4.5 and 8.5 for year 2050 and 2070. (Image by WBG)

How vulnerable are holoparasitic plants with obligate hosts to negative climate change impacts?

A research team led by Prof. XU Jun from the Institute of Hydrobiology (IHB) of the Chinese Academy of Sciences demonstrated that the FD of commercial marine fish communities significantly responds to climate warming and increasing fishing pressure with opposite effects d... 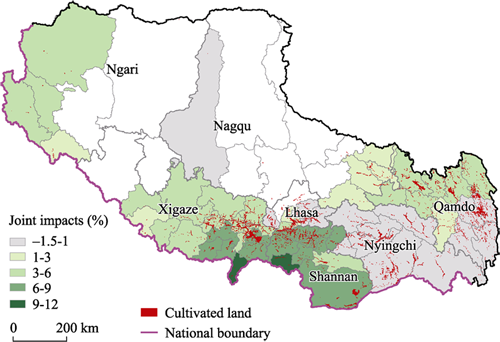 Food supply has always been a major concern in Tibet's development. It is important to clarify the impact of climate change on the yield of cereal, the main crop in Tibet. Prof. SHI Wenjiao's team at the Institute of Geographic Sciences and Natural Resources Research has ...