A new potential astronomical observation site on the Tibetan Plateau is detailed in a paper in Nature. Sometimes nicknamed the Earth's "third pole", this plateau, which stands at over 4,000 m above sea level, could be suitable for the installation of next-generation large telescopes, the study suggests.

The Earth has a limited number of high-quality astronomical sites deemed good enough to install and operate next-generation telescope facilities. Thus far, all identified sites are located in the Western Hemisphere. However, a site located on the highest plateau on Earth - the Tibetan Plateau - has been singled out by astronomers and particle astrophysicists alike for its promising observing opportunities.

Licai Deng and colleagues spent three years evaluating the telescope-installation suitability of the Lenghu site, situated at a local summit on Saishiteng Mountain near the town of Lenghu in the Qinghai Province of China. The altitudes of potential locations studied ranged from 4,200 to 4,500 metres above sea level. Narrowing their focus down to a 100,000 km2 area surrounding Lenghu, the team noted an area of relatively low altitude (below 3,000 m) with a very dry climate and a remarkably clear sky, both during the day and at night. Indeed, 70% of the nights studied at this site were clear. In some measured quantities, the site is similar to Mauna Kea for some periods of time. Stable local air, evidenced by small fluctuations in median night-time temperatures of just 2.4 °C, and low precipitable water vapour of less than 2 mm for 55% of annual night-time, provide further evidence for the site's potential to support ground-layer adaptive optics.

Additional infrastructure will be needed to develop this site and carry out further tests. However, the identification of the Tibetan plateau as a new, high-quality astronomical observing site is a promising development in the search for suitable locations for ground-based observatories to host very large telescopes, the authors conclude. (Nature China)

Licai Deng is affiliated with the National Astronomical Observatories of Chinese Academy of Sciences (NAOC).

Lenghu on the Tibetan Plateau as an astronomical observing site

Qinghai-Tibet Plateau Summer Rainfall in Next 2-10 Years Can be Predicted; Scientists to Share Data with S. Asian Countries for Reference 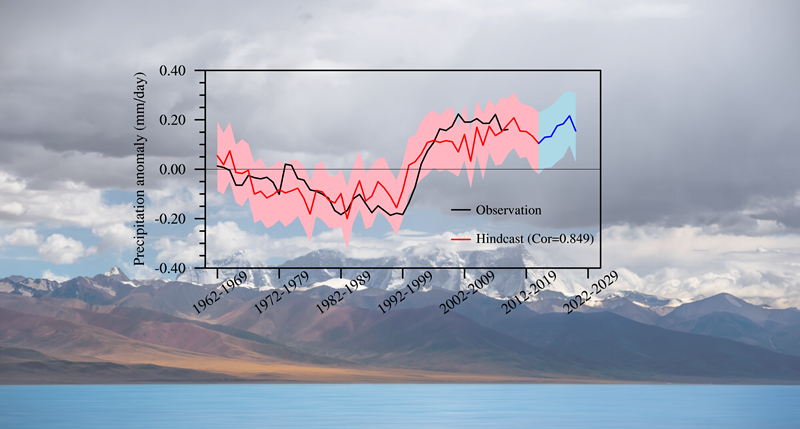 Scientists from the Institute of Atmospheric Physics find summer rainfall on the Tibetan Plateau is highly predictable on multiyear timescales in large ensemble predictions.