Samples from the Moon's Oceanus Procellarum, an ancient mare basalt whose name translates to "Ocean of Storms," may be able to calm at least one scientific squall: the source of lunar water.

China's lunar lander Chang'E-5 delivered the first real-time, on-site definitive confirmation of water signal in the basalt's rocks and soil via on-board spectral analysis in 2020. The finding was validated through laboratory analysis of samples the lander returned in 2021. Now, the Chang'E-5 team has determined where the water came from.

The researchers published their results on June 14 in Nature Communications.

"For the first time in the world, the results of laboratory analysis of lunar return samples and spectral data from in-situ lunar surface surveys were used jointly to examine the presence, form and amount of 'water' in lunar samples," said co-corresponding author LI Chunlai from the National Astronomical Observatories of the Chinese Academy of Sciences (NAOC). "The results accurately answer the question of the distribution characteristics and source of water in the Chang'E-5 landing zone and provide a ground truth for the interpretation and estimation of water signals in remote sensing survey data."

Chang'E-5 did not observe lunar rivers or springs; rather the lander identified, on average, 30 hydroxyl parts per million in rocks and soil on the Moon's surface. The molecules, made of one oxygen and one hydrogen atom, are the main ingredient of water, as well as the most common result of water molecules chemically reacting with other matter. Despite representing what LI called the "weak end of lunar hydration features," hydroxyl is to water what smoke is to fire: evidence.

The samples were collected during the hottest part of the Moon's day, at temperatures nearing 200°F, when the surface would be at its driest. The timing also coincides with low solar winds, which can contribute to hydration at high enough power.

Even with such dehydrated conditions, the hydrations signals still appeared - so, the researchers asked, where did they come from?

First detected by the lander's on-board lunar mineralogical spectrometer in 11 rock and soil samples and further confirmed by five additional multi-part laboratory analyses on eight of the samples, the hydroxyl was found to originate from two different sources. A small portion appeared in glassy material made by solar winds interfering with the lunar surface, just as it did in an Apollo 11 sample collected in 1971 and tested in the early 2000s. But the Chang'E-5 sample only contained about a third the amount of solar wind-generated, hydroxyl-containing glass as the Apollo sample.

This suggests that the solar wind still contributed, although weakly, to the hydroxyl contents observed in the Chang'E-5 landing site. The bulk of the hydroxyl in the Chang'E-5 samples was contained in apatite, a crystalline, phosphate-rich mineral naturally found to be on the Moon, as well as Earth.

"This excess hydroxyl is indigenous, demonstrating the presence of lunar-originated internal water in the Chang'E-5 lunar samples, and that water played an important role in the formation and crystallization of the late lunar basaltic magma," LI said, referring to the composition of Chang'E-5 landing site in the mare basalt of Oceanus Procellarum. "By investigating lunar water and its source, we are learning more about the formation and evolution of not just the Moon itself, but also the solar system. In addition, lunar water is expected to provide support for future human lunar in-situ resources."

The researchers are planning subsequent lunar explorations with Chang'E-5's successors, Chang'E-6 and Chang'E-7. According to LI, they will continue researching lunar water via remote sensing, on-site detection and laboratory analysis to better understand the source, distribution and temporal variation of lunar water, including polar ice.

Analyzing the lunar sample brought back by Chang'E-5, scientists recently found that every ton of lunar surface contained about 28.5g water. (Image by NAOC/GRAS) 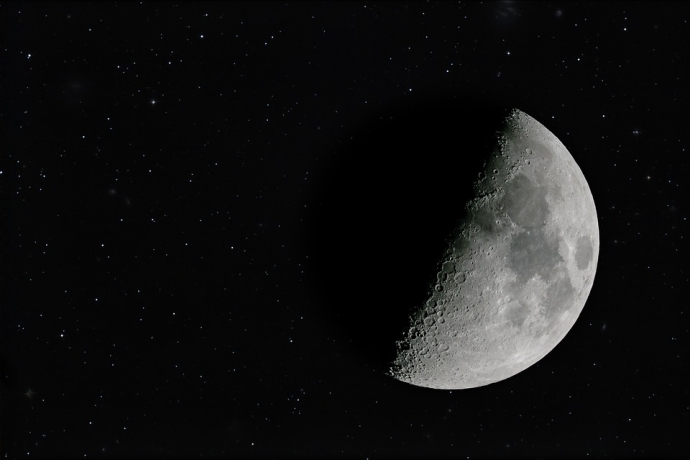 Researchers aged 47 basalt fragments of lunar samples with radiometric dating and found that they were formed roughly 2.03 billion years ago - 800 to 900 million years more recently than the Apollo and Luna samples indicated.

Chang'E-5 Mission Sheds Light on the Evolution of the Moon

Chinese scientists offer new insights into the thermal and chemical evolution of the Moon, with study from China's Chang'E-5 lunar sample return mission. Analysis of these basalts reveal how the composition and water content of the Moon changed over time, which may help u...