The polarization of FRBs contains crucial information about their environments. High-fidelity polarization measurements of FRBs are thus crucial to understanding their origin.

The study was published in Science on March 18.

Such a unified description of repeating FRBs indicates a complex environment near and/or around the bursting sources, which could be a supernova remnant, a pulsar wind nebula, or plasma near massive blackholes.

FRB 121102, the first repeating FRB source, possesses a high degree of polarization with a correspondingly extremely large RM, which is a product of electron density and magnetic field strength along the line of sight.

According to a study published in Nature in 2021, in a 50-day span in 2019, FAST detected 1,652 pulses, but no polarization has been detected within this treasure trove. "Non-detection of linear polarization is a norm rather than exception with FAST in its band between 1.0-1.4 GHz, despite its unparalleled sensitivity," said Dr. LI Di, the corresponding author of both papers.

The team has also continued to monitor other active repeaters with FAST. "We were much puzzled by the lack of polarization in most of our observations. Later, when we systematically looked into these FRBs with other major facilities in other frequency bands, particularly those higher than that of FAST, a unified picture emerged," said the first author of the paper, Dr. FENG Yi, currently a staff scientist at the Zhejiang National Lab.

In a combined analysis with other published data amounting to a total of 9 repeating and 12 single-burst FRBs, the researchers were able to quantitatively describe the depolarization toward low frequencies based on a simple physical picture, namely multi-path RM scattering. Due to the inhomogeneous electron density in front of and/or around the FRBs, the pulse signal arriving at any given instant could contain radio photons that have traveled along different paths. As a result, the pulse signal loses part/all of its polarization as the photons are aggregated by the telescope receiver.

Such an effect is greater on photons/light waves of longer wavelength (lower frequency) and gives rise to the apparent discrepancies among telescopes. In particular, it explains why the polarization was not detected at FAST.

Such a simple explanation, with only one free parameter, represents a major step toward a physical understanding of the origin of repeating FRBs. The numerical value of RM scatter varies among repeaters, with those with larger σRM tending to be more active and with signs of a more complex environment. YANG Yuanpei of Yunnan University has been leading the team's model development efforts. A similar trend may be found in non-repeaters, although such multiple-band information for non-repeaters has not been achieved due to technical difficulties.

"These extremely active FRBs could be a distinct population. We start to see the evolutionary trend in FRBs, with more active sources in more complex environments represented by larger σRM being younger explosions," said Dr. LI.

The degree of linear polarization for FRB sources is consistent with RM scattering. (Image by NAOC) 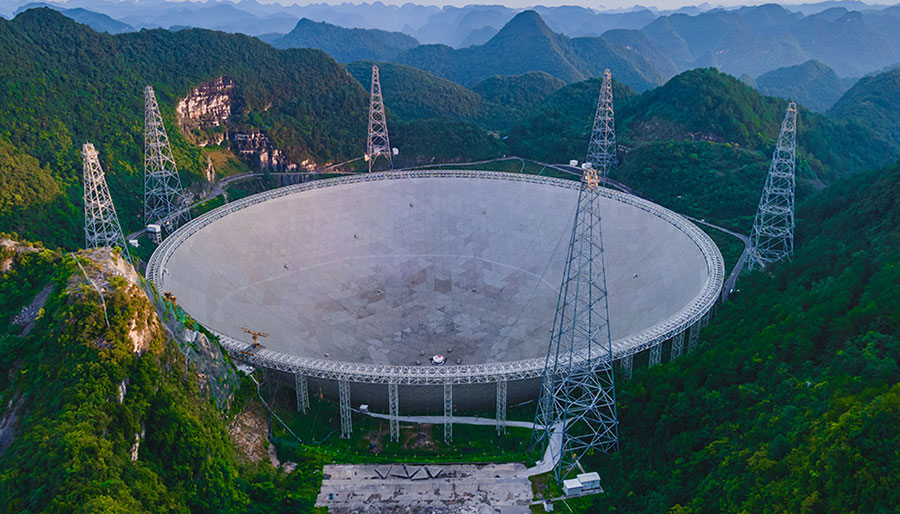 Depolarized Waves Point to the Origin of Fast Radio Bursts

In a paper published in Science, researchers analyzed the polarization of active FRBs and offered the first systematic description of the environments in which they reside. The results indicate that the bursts likely originate in young or complex environments suc...