In a study published online in Nature, Chinese scientists have described their use of genome editing to achieve robust disease resistance without any growth defects. This achievement represents an important theoretical and technological breakthrough in the use of susceptibility genes to breed disease-resistant plants.
GAO Caixia's team from the Institute of Genetics and Developmental Biology and QIU Jinlong's team from the Institute of Microbiology of the Chinese Academy of Sciences have developed a new wheat mutant, Tamlo-R32, which exhibits robust resistance to powdery mildew disease and does not display any growth or yield defects.
Plant diseases cause the loss of up to 30% of all crops produced per year worldwide, threatening global food security. Pathogens typically leverage susceptibility genes (S genes) in plant hosts to achieve successful infection events. Although mutations in S genes result in broad-spectrum, durable resistance to pathogens, S gene knockout usually results in undesired pleiotropic effects, thus greatly limiting its use in disease-resistance breeding.
Wheat (Triticum aestivum) is a major staple crop around the world, feeding more than one-third of the global population. Powdery mildew disease is one of the major diseases affecting wheat yields worldwide.
The two teams had previously in 2014 developed a wheat variety resistant to powdery mildew disease through genetically perturbing the wheat’s Mildew resistance locus o (MLO), a wheat susceptibility gene. Although this variant displayed robust disease resistance, it grew poorly compared to wild-type wheat.
In this study, the researchers found that the Tamlo-R32 mutant harbors a large 304-kilobase pair deletion in the TaMLO-B1 locus in addition to two premature stop codons in the TaMLO-A1 and TaMLO-D1 loci. Notably, the large deletion in the wheat B genome resulted in an altered local chromatin landscape, leading to the ectopic activation of TaTMT3B.
Through compensation and knockout studies, the researchers identified the role of TaTMT3B in alleviating growth and yield penalties associated with MLO disruption.
The function of TMT3 is conserved in the model plant Arabidopsis thaliana, suggesting its broadened potential across multiple crop species, according to the researchers.
To expand the utility of their research results into crop disease resistance breeding, the researchers used traditional breeding methods to cross the Tamlo-R32 mutant with elite wheat cultivars to successfully introduce the superior disease resistance traits into the elite cultivars.
Furthermore, the researchers described a facile and rapid approach for using multiplexed CRISPR genome editing technologies to directly create the corresponding genetic perturbations in elite wheat varieties, enabling the successful creation of broad-spectrum powdery mildew resistant wheat in only 2-3 months.
This work highlights the potential for stacking genetic changes in order to eliminate any growth defects caused by recessive alleles. Ultimately, this study provides a new perspective on the use of multiplexed genome editing to breed for disease-resistant and high-yielding crop varieties by taking advantage of S gene-mediated disease resistance.

Institute of Genetics and Developmental Biology 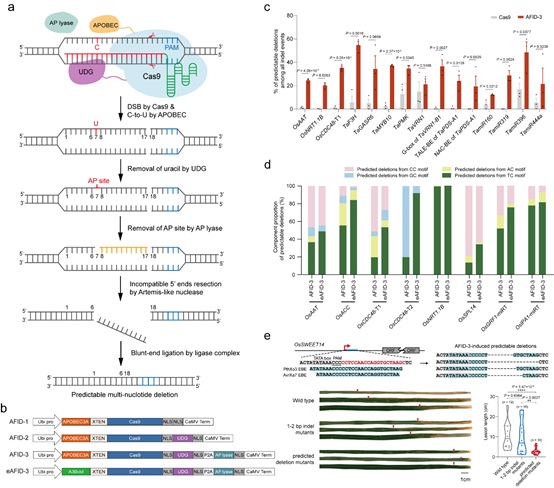 A research team led by Prof. GAO Caixia from the Institute of Genetics and Developmental Biology has been focusing on developing novel technologies to achieve efficient and specific genome engineering. Based on the cytidine deamination and base excision repair (BER) mecha...