Chang'e-5 Mission Sheds Light on the Evolution of the Moon

Chinese scientists offer new insights into the thermal and chemical evolution of the Moon, with study from China's Chang'E-5 lunar sample return mission.

These samples of volcanic rock, which is a type of basalt, are the youngest lunar samples to be directly dated, at around 2 billion years old. Analysis of these basalts reveal how the composition and water content of the Moon changed over time, which may help us to understand the geological and geochemical evolution of the Moon.

Their results are presented in three Nature papers on Oct. 19.

On 17 December 2020, the Chang'E-5 mission returned around 1.73 kg of lunar materials to Earth, more than 40 years since previous samples were retrieved by the US Apollo and Soviet Luna missions. The landing site of the Chang'E-mission was selected for being one of the youngest mare basalt units, formed by volcanic eruptions. These volcanic rocks serve as a record of the thermal and chemical evolution of the Moon.

Previous radioisotope dating of lunar samples suggests that most lunar volcanic activity ceased by around 2.9–2.8 billion years ago. Crater-counting chronology, an alternative method for calculating the ages of planetary surfaces, predicts that there may be volcanic flows between 3 and 1 billion years old, suggesting that volcanism may have persisted for a longer period. The latter dating method has large uncertainties owing to the lack of returned samples for calibration.

However, analysis of the new samples by LI Xianhua and colleagues shows that they are 2.03 billion years old, which extends the reported duration of lunar volcanic activity by around 800–900 million years and reveals that the Moon's interior was still evolving at around 2 billion years ago.

The dates of the basalts estimated by LI and colleagues are estimated at high accuracy, and are older than recently reported analyses of samples from the same region.

"This finding brings forward the time at which the Moon's interior was still evolving from around 4 billion years ago to 2 billion years ago," said LI from the Institute of Geology and Geophysics (IGG) of the Chinese Academy of Sciences. The new age for lunar basalts is also used to better calibrate crater-counting chronology models, for dating planetary surface ages elsewhere in the Solar System.

In the second study, HU Sen and colleagues from IGG analyze the water composition of the basalt samples. The distribution of water in the Moon's interior can give clues about the processes that drove mantle formation and volcanic activity, as well as how long volcanic activity continued for.

Researchers show that the parent magma of the 2-billion-year-old basalts sampled by the Chang'E-5 mission contained less water than samples from regions of older volcanism (basalts that erupted 4.0–2.8 billion years ago).

They suggest that the source of the younger basalts became dehydrated during prolonged volcanic activity, consistent with the notion that volcanic activity continued until at least 2 billion years ago.

LI and HU's colleague, YANG Wei and his team, show in their study that the source of the younger basalts seems to have contained lower levels of heat-producing elements than expected.

This finding indicates that that the Moon may have cooled off more slowly than previously thought, which would affect mantle dynamics. The results from YANG and colleagues may provide a basis for exploring new models for the thermal evolution of the Moon. 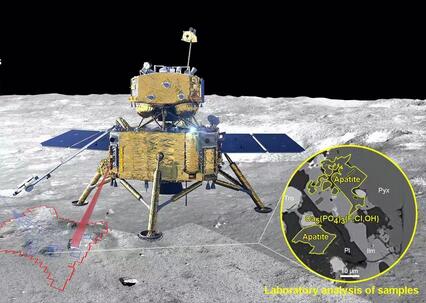 An in situ detection by China's Chang'e-5 lunar probe and the subsequent analysis of its returned samples revealed at least two sources of water on the Moon, one brought by solar wind and the other from indigenous sources. Chang'e-5, comprising an orbiter, a lander, an as...

Chinese scientists have made an important new finding that is expected to further advance studies of the moon and planets inside the solar system. Researchers recently upgraded a lunar chronology model by measuring and analyzing samples brought back from the moon by China...