The Moon's largest sea may have been even stormier than its name implies, according to the first new lunar samples since the then-Soviet Union's Luna mission in 1976.

In December 2020, China's Chang'E-5 collected roughly 3.8 pounds of soil and rock from the dark and relatively flat region, dubbed Oceanus Procellarum, or "Ocean of Storms." Covering more than 10% of the lunar surface, analysis of its sampled composition presented a new kind of volcanic rock that could reveal more complexity about the Moon's volcanic activity.

The lunar samples' characteristics were published on October 14, 2021, in National Science Review.

"The first comprehensive lunar assessment was based on satellite pictures in the early 1960s, and it divided the moon into two regions: namely, smooth maria - the flat, smooth basaltic seas - and cratered highlands, both studded with craters of varying sizes," said the first author LI Chunlai, a researcher at the National Astronomical Observatories of the Chinese Academy of Sciences (NAOC). "Samples are key to promoting our scientific research from remote observation to laboratory measurements."

Previous studies of the lunar’s surface indicated that the maria might be filled with basaltic rock formed from the rapid cooling of lava, while the craters were produced by impacts.

"Returned lunar samples from six Apollo and three Luna missions in the last century have significantly enhanced our understanding of the Moon's history and evolution," LI said. "However, that sampling focused on areas that do not represent the most widespread lunar surface features. These limited sampling sites have restricted new understandings of the Moon."

Researchers took 316,800 images of the CE-5 samples and identified nearly three million particles. Ranging in size from less than 10 microns (a dust or pollen particle) to 500 microns (about a quarter the thickness of a credit card), most particles in the lunar soil was about 50 microns (the width of a human hair).

Chemically, the particles are mostly free of evidence of impact debris, indicating they are of lunar origin. They are mainly characteristic of basalt, but different from magnesium- and iron-rich basalt found on Earth. Lunar basalt is low in magnesium but high in iron oxide, according to the results.

"This could represent a new class of basalt," LI noted. While this means the Earth criteria cannot be used to assess the lunar version, it could be a differentiated lunar basalt which may lead to a better understanding of the lunar volcanic activity. "This compositional information suggests that CE-5's samples might represent a new lunar basalt different from previous Apollo and Luna missions."

LI also added that the presence of the lunar-originated basalt, combined with observations of the sample sites indicating the basalt appeared after specifically aged impacts, could reveal evidence of recent volcanic activity - and may even require new theories of volcanic activity to accommodate the varying compositions and ages of the samples.

"This study focused on the preliminary examination of the CE-5 lunar samples to provide basic information for subsequent scientific research," LI said. "These samples will open an epoch-making window for studying lunar science. We've already found that the Moon is so vast and more heterogenous than we thought, so more missions to collect samples should be scheduled."

The panoramic image of the CE-5 landing site. (Image by CNSA/GRAS/NAOC)

Characteristics of the lunar samples returned by Chang’E-5 mission 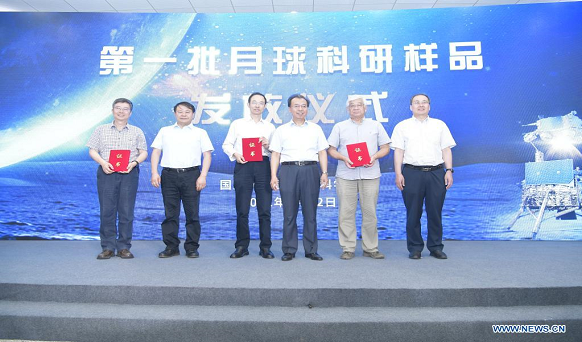 China on Monday delivered about 17 grams of lunar samples brought back by the Chang'e-5 probe to 13 institutions, which had applied for research programs to the Lunar Exploration and Space Program Center of the China National Space Administration (CNSA). 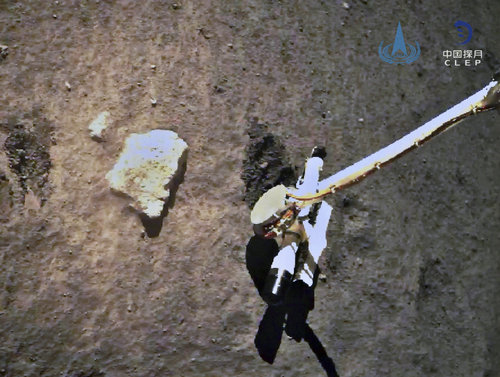 Rules Unveiled for Storage, Use of Lunar Samples

China published its Regulations on the Management of Lunar Samples on Monday, aiming to improve scientific research and international cooperation. The regulations were developed by the China National Space Administration and have nine chapters and 37 clauses. They govern ...