An international research team studying data from thousands of people worldwide has shown that people's metabolisms peak earlier and decline later in life than previously thought.

The study was published in Science on August 13.

The researchers analyzed the average calories burned by more than 6,600 people ranging from a one-week-old to a 95-year-old as they went about their daily lives in 29 countries around the world. They discovered that changes in metabolism involve more than age-related changes in lifestyle or body composition.

The scientists found that infants had the highest metabolic rates of all and these rates were much higher than predicted. They discovered that energy needs shoot up during the first 12 months of life, causing a one-year-old to burn calories 50% faster for their body size than an adult.

"This is probably in part because during the first weeks of life they are mostly sedentary, and a year or so later they become really active. Besides, their resting metabolic rates go up enormously at the same time, potentially related somehow to their phenomenal growth rate," said co-corresponding author Prof. John Speakman, a researcher at the Shenzhen Institute of Advanced Technology (SIAT) of the Chinese Academy of Sciences and the University of Aberdeen.

The researchers discovered that after this initial surge in infancy, metabolism slows by about 3% each year until we reach our 20s, when it levels off into a new normal.

Despite the teen years being a time of growth spurts, the scientists didn't see any uptick in daily calorie needs in adolescence after they took body size into account.

"We really thought puberty would be different and it’s not," said Prof. Herman Pontzer from Duke University, the other co-corresponding author of the study.

He said midlife was another surprise.

"Perhaps you've been told that it's all 'downhill after 30' when it comes to your weight. But while several factors could explain the thickening waistlines that often emerge during our prime working years, the findings suggest that a changing metabolism isn’t one of them," said Prof. Pontzer.

In fact, the researchers discovered that energy expenditures during these middle decades—our 20s, 30s, 40s and 50s—were the most stable. Even during pregnancy, a woman’s calorie needs were no more or less than expected as the baby grows.

The data suggest that our metabolisms don’t really start to decline again until after age 60. The slowdown is gradual, only 0.7% a year. But a person in their 90s needs 26% fewer calories each day than someone in midlife.

"Lost muscle mass as we get older may be partly to blame since muscle burns more calories than fat but it’s not the whole picture," said Prof. Pontzer. "We controlled for muscle mass so it seems it’s because our cellular metabolism is also slowing down. We found the patterns held even when differing activity levels were taken into account."

To come up with total daily energy expenditure figures, the researchers relied on the "doubly labeled water" method, which measures the average daily metabolic rate of an organism over time. Use of this method has been limited in size and scope due to cost. For this study, multiple research laboratories combined their data in a single shared database, offering researchers a chance to achieve robust insights smaller studies couldn’t reveal.

"By combining data across many component studies, this paper, for the first time, reveals what is happening to our metabolism over the whole life course and the contributions to those changes in resting and activity metabolism," said Prof. Speakman. 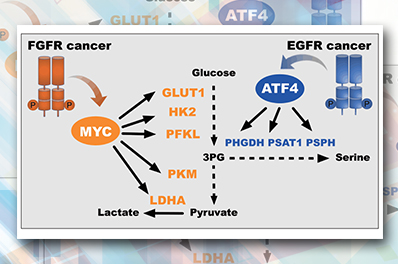 Recently, a joint team from the Shanghai Institute of Materia Medica (SIMM) and Xiamen University has made progresses in the identification of the metabolic vulnerabilities of receptor tyrosine kinases (RTK) aberrant cancer, the well-defined molecular subtypes in clinical...

Researchers from the Research Group of Environmental Health and Molecular Toxicology, Institute of Urban Environment used oleate, a prominent dietary, intestinal, serum and arterial tissue free fatty acid to suppress the activity of PPARs and to induce lipid accumulation ...