China's Large High Altitude Air Shower Observatory (LHAASO)—one of the country's key national science and technology infrastructure facilities—has found a dozen ultra-high-energy (UHE) cosmic accelerators within the Milky Way. It has also detected photons with energies exceeding 1 peta-electron-volt (quadrillion electron-volts or PeV), including one at 1.4 PeV. The latter is the highest energy photon ever observed.

These findings overturn the traditional understanding of the Milky Way and open up an era of UHE gamma astronomy. These observations will prompt people to rethink the mechanism by which high-energy particles are generated and propagated in the Milky Way, and will encourage people to explore more deeply violent celestial phenomena and their physical processes as well as test basic physical laws under extreme conditions.

These discoveries are published in the journal Nature on May 17. The LHAASO International Collaboration, which is led by the Institute of High Energy Physics (IHEP) of the Chinese Academy of Sciences, completed this study.

The LHAASO Observatory is still under construction. The cosmic accelerators—known as PeVatrons since they accelerate particles to the PeV range—and PeV photons were discovered using the first half of the detection array, which was finished at the end of 2019 and operated for 11 months in 2020.

Photons with energies exceeding 1 PeV were detected in a very active star-forming region in the constellation Cygnus. LHAASO also detected 12 stable gamma ray sources with energies up to about 1 PeV and significances of the photon signals seven standard deviations greater than the surrounding background. These sources are located at positions in our galaxy that can be measured with an accuracy better than 0.3°. They are the brightest Milky Way gamma ray sources in LHAASO's field of view.

Although the accumulated data from the first 11 months of operation only allowed people to observe those sources, all of them emit so-called UHE photons, i.e., gamma rays above 0.1 PeV. The results show that the Milky Way is full of PeVatrons, while the largest accelerator on Earth (LHC at CERN) can only accelerate particles to 0.01 PeV. Scientists have already determined that cosmic ray accelerators in the Milky Way have an energy limit. Until now, the predicted limit was around 0.1 PeV, thus leading to a natural cut-off of the gamma-ray spectrum above that.

But LHAASO's discovery has increased this “limit,” since the spectra of most sources are not truncated. These findings launch an era for UHE gamma astronomic observation. They show that non-thermal radiation celestials, such as young massive star clusters, supernova remnants, pulsar wind nebulas and so on—represented by Cygnus star-forming regions and the Crab nebula—are the best candidates for finding UHE cosmic rays in the Milky Way.

Through UHE gamma astronomy, a century-old mystery-—the origin of cosmic rays—may soon be solved. LHAASO will prompt scientists to rethink the mechanisms of high energy cosmic ray acceleration and propagation in the Milky Way. It will also allow scientists to explore extreme astrophysical phenomena and their corresponding processes, thus enabling examination of the basic laws of physics under extreme conditions.

LHAASO and Its Core Scientific Goals

LHAASO is a major national scientific and technological infrastructure facility focusing on cosmic ray observation and research. It is located 4,410 meters above sea level on Mt. Haizi in Daocheng County, Sichuan Province. When construction is completed in 2021, LHAASO’s particle detector arrays will comprise 5,195 electromagnetic particle detectors and 1,188 Muon detectors located in the square-kilometer complex array (KM2A), a 78,000 m2 water Cherenkov detector array (WCDA), and 18 wide-field-of-view Cherenkov telescopes (WFCTA). Using these four detection techniques, LHAASO will be able to measure cosmic rays omnidirectionally with multiple variables simultaneously. The arrays will cover an area of about 1.36 km2.

LHAASO's core scientific goal is to explore the origin of high-energy cosmic rays and study related physics such as the evolution of the universe, the motion and interaction of high-energy astronomical celestials, and the nature of dark matter. LHAASO will extensively survey the universe (especially the Milky Way) for gamma ray sources. It will precisely measure their energy spectra over a broad range—from less than 1 TeV (trillion electron-volts or tera-electron-volts) to more than 1 PeV. It will also measure the components of diffused cosmic rays and their spectra at even higher energies, thus revealing the laws of the generation, acceleration and propagation of cosmic rays, as part of the exploration of new physics frontiers.

The signal of UHE photons around PeVatrons is so weak that just one or two photons at PeV energy can be detected using 1 km2 of detectors per year even when focusing on the Crab Nebula, known as the “standard candle for gamma astronomy.” What's worse, those one or two photons are submerged in tens of thousands of ordinary cosmic rays. The 1,188 muon detectors in LHAASO's KM2A are designed to select photon-like signals, making LHAASO the most sensitive UHE gamma ray detector in the world. With its unprecedented sensitivity, in just 11 months, the half-sized KM2A detected one photon around 1 PeV from the Crab Nebula. In addition, KM2A found 12 similar sources in the Milky Way, all of which emit UHE photons and extend their spectra continuously into the vicinity of 1 PeV. Even more important, KM2A has detected a photon with energy of 1.4 PeV—the highest ever recorded. It is clear that LHAASO's scientific discoveries represent a milestone in identifying the origin of cosmic rays. To be specific, LHAASO's scientific breakthroughs fall into the following three areas:

1) Revealing the ubiquity of cosmic accelerators capable of accelerating particles to energies exceeding 1 PeV in the Milky Way. All the gamma ray sources that LHAASO has effectively observed radiate photons in the UHE range above 0.1 PeV, indicating that the energy of the parent particles radiating these gamma rays must exceed 1 PeV. As a matter of convention, these sources must have significances of photon signals five standard deviations greater than the surrounding background. The observed energy spectrum of these gamma rays has not truncated above 0.1 peV, demonstrating that there is no acceleration limit below PeV in the galactic accelerators.

This observation violates the prevailing theoretical model. According to current theory, cosmic rays with energies in the PeV range can produce gamma rays of 0.1 PeV by interacting with surrounding gases in the accelerating region. Detecting gamma rays with energies greater than 0.1 PeV is an important way to find and verify PeV cosmic ray sources. Since previous international mainstream detectors work below this energy level, the existence of PeV cosmic ray accelerators had not been solidly confirmed before. But now LHAASO has revealed a large number of PeV cosmic acceleration sources in the Milky Way, all of which are candidates for being UHE cosmic ray generators. This is a crucial step toward determining the origin of cosmic rays.

2) Beginning an era of “UHE gamma astronomy.” In 1989, an experimental group at the Whipple Observatory in Arizona successfully discovered the first object emitting gamma radiation above 0.1 TeV, marking the onset of the era of “very-high-energy” gamma astronomy. Over the next 30 years, more than 200 “very-high-energy” gamma ray sources were discovered. However, the first object emitting UHE gamma radiation was not detected until 2019. Surprisingly, by using a partly complete array for less than a year, LHAASO has already boosted the number of UHE gamma ray sources to 12.

With the completion of LHAASO and the continuous accumulation of data, we can anticipate to find an unexplored “UHE universe” full of surprising phenomena. It is well known that background radiation from the Big Bang is so pervasive it can absorb gamma rays with energies greater than 1 PeV. Even if gamma rays were produced beyond the Milky Way, we wouldn't be able to detect them. This makes LHAASO's observational window so special.

3) Photons with energies greater than 1 PeV were first detected from the Cygnus region and the Crab Nebula. The detection of PeV photons is a milestone in gamma astronomy. It fulfills the dream of the gamma astronomy community and has long been a strong driving force in the development of research instruments in the field. In fact, one of the main reasons for the explosion of gamma astronomy in the 1980s was the challenge of the PeV photon limit. The star-forming region in the direction of Cygnus is the brightest area in the northern territory of the Milky Way, with a large number of massive star clusters. Massive stars live only on the order of one million years, so the clusters contain enormous stars in the process of birth and death, with a complex strong shock environment. They are ideal “particle astrophysics laboratories,” i.e., places for accelerating cosmic rays.

The first PeV photons found by LHAASO were from the star-forming region of the constellation Cygnus, making this area the best candidate for exploring the origin of UHE cosmic rays. Therefore, much attention has turned to LHAASO and multi-wavelength observation of this region, which could offer a potential breakthrough in solving the “mystery of the century.”

Extensive observational studies of the Crab Nebula over the years have made the celestial body almost the only standard gamma ray source with a clear emission mechanism. Indeed, precise spectrum measurements across 22 orders of magnitude clearly reveal the signature of an electron accelerator. However, the UHE spectra measured by LHAASO, especially photons at PeV energy, seriously challenge this “standard model” of high-energy astrophysics and even the more fundamental theory of electron acceleration.

LHAASO has developed and/or improved: 1) clock synchronization technology over long distances that ensures timing synchronization accuracy to the sub-nanosecond level for each detector in the array; 2) multiple parallel event trigger algorithms and their realization, with the help of high-speed front-end signal digitization, high-speed data transmission and large on-site computing clusters; and advanced detection technologies include 3) silicon photo multipliers (SiPM) and 4) ultra-large photocathode micro-channel plate photomultiplier tubes (MCP-PMT). They are being employed at LHAASO on a large scale for the first time. They have greatly improved the spatial resolution of photon measurements and lowered the detection energy threshold. These features allow detectors to achieve unprecedented sensitivity in exploring the deep universe at a wide energy range. LHAASO provides an attractive experimental platform for conducting interdisciplinary research in frontier sciences such as atmosphere, high-altitude environment and space weather. It will also serve as a base for international cooperation on high-level scientific research projects.

Cosmic ray research in China has experienced three stages. LHAASO represents the third generation of high-altitude cosmic ray observatories. High-altitude experiments are a means of making full use of the atmosphere as a detector medium. In this way, scientists can observe cosmic rays on the ground, where the size of the detector can be much larger than in a space-borne detector outside the atmosphere. This is the only way to observe cosmic rays at very high energy.

In 2006, the joint Sino-Italian ARGO-YBJ experiment was built at the same site.

In 2009, at the Xiangshan Science Forum in Beijing, Professor CAO Zhen proposed to build a large-scale composite detection array (i.e., LHAASO) in a high-altitude area. The LHAASO project was approved in 2015 and construction began in 2017. By April 2019, construction was 25% complete and scientific operation had begun. By January 2020, an additional 25% had been completed and put into operation. In December of the same year, 75% of the facility had been completed. The entire facility will be completed in 2021. LHAASO has already become one of the world's leading UHE gamma detection facilities, and will operate for a long time. With it, scientists will be able to study the origin of cosmic rays from many aspects.

Chinese scientists have detected a dozen ultra-high-energy (UHE) cosmic accelerators within the Milky Way, a find that could overturn humanity's understanding of the galaxy. It could help reveal the origin of cosmic rays, which have puzzled scientists for a century. The f... 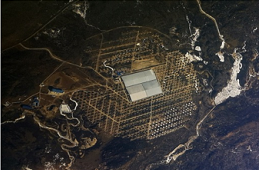 A giant observatory to search for the origin of cosmic rays in Southwest China's Sichuan province was half completed and thousands of its detectors have been put into operation, said the Chinese Academy of Sciences (CAS). The project, known as the Large High-Altitude Air ...