Zooming in on Dark Matter

Most matter in the Universe is dark and completely different in nature from the matter that makes up stars, planets and people. Galaxies form and grow when gas cools and condenses at the center of enormous clumps of this dark matter, the so-called dark matter haloes.

An international research team led by Prof. WANG Jie from the National Astronomical Observatories of the Chinese Academy of Sciences (NAOC) used supercomputers in China and Europe to zoom in on a typical region of a virtual universe as if zooming in on an image of the Moon to see a flea on its surface.

The study was published in Nature on Sept. 2.

The biggest dark matter haloes in today's universe contain huge galaxy clusters, collections of hundreds of bright galaxies. The properties of such clusters, which weigh over a quadrillion (a million billion) times as much as our Sun, are well studied.

On the other hand, the masses of the smallest dark matter haloes are unknown. They are hypothesized to be about the mass of the Earth, according to currently popular theories.

Such small haloes would be extremely numerous, containing a substantial fraction of all the dark matter in the universe. However, they would remain dark throughout cosmic history because stars and galaxies grow only in haloes more than a million times as massive as the Sun.

"These small haloes can only be studied by simulating the evolution of the Universe in a large supercomputer," said Prof. WANG.

The research team, based at the National Observatory of the Chinese Academy of Sciences in China, Durham University in the UK, the Max Planck Institute for Astrophysics in Germany, and the Center for Astrophysics in the USA, took five years to develop, test and carry out their cosmic zoom.

It enabled them to study the structure of dark matter haloes of all masses between that of the Earth and that of a big galaxy cluster. In number, the zoom covers a mass range of 10 to 10 to the power 30 (that is a one followed by 30 zeroes), which is equivalent to the number of kilograms in the Sun.

By zooming-in on the virtual universe in such microscopic detail, the researchers were able to study the structure of dark matter haloes ranging in mass from that of the Earth to a big galaxy cluster.

"Surprisingly, we find that haloes of all sizes have a very similar internal structure, i.e., they are extremely dense at the center, become increasingly spread out, and have smaller clumps orbiting in their outer regions," said Prof. WANG. "Without a measure scale it was almost impossible to tell an image of a dark matter halo of a massive galaxy from one whose mass is a fraction of the Sun."

Particles of dark matter can collide near the centers of haloes, and may, according to some theories, annihilate in a burst of energetic (gamma) radiation.

Co-author, Prof. Carlos Frenk from Durham University said: "By zooming in on these relatively tiny dark matter haloes, we can calculate the amount of radiation expected to come from different sized haloes."

Most of this radiation would be emitted by dark matter haloes too small to contain stars and future gamma-ray observatories might be able to detect these emissions, making these small objects individually or collectively "visible".

"This would confirm the hypothesized nature of the dark matter, which may not be entirely dark after all," said co-author Simon White from the Max Planck Institute of Astrophysics. "Our research sheds light on these small haloes as we seek to learn more about what dark matter is and the role it plays in the evolution of the universe."

The simulations were carried out in the Cosmology Machine supercomputers in Guangzhou, China, Durham, England of the UK, and Munich, Germany.

Fig. 1 An artist’s impression of dark matter haloes with various mass in the Universe (Image by YU Jingchuan, Beijing Planetarium) 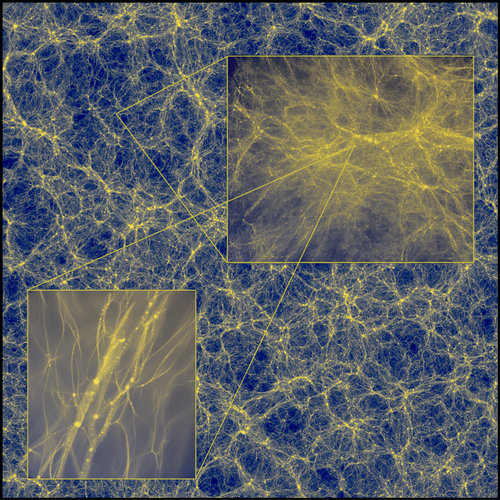 An international team of researchers has used supercomputers in China and Europe to study the internal structures of the smallest clumps of dark matter in a computer-generated universe, which is expected to help scientists learn more about what dark matter is and its role... 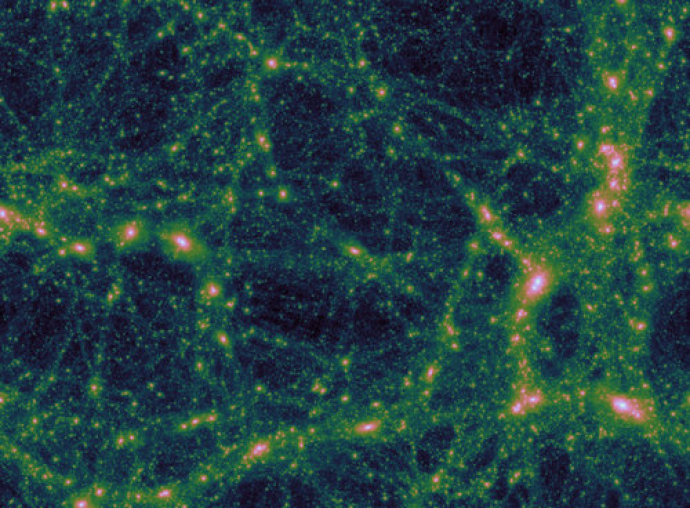 Researchers from the National Astronomical Observatories of China, Peking University and Tsinghua University have found a special population of dwarf galaxies that could mainly consist baryons within radii of up to tens of thousands of light-years. This contrasts with the...