Research Efforts Underway in China to Hunt down Novel Coronavirus

The ongoing efforts to contain the spread of the novel coronavirus (2019-nCoV) have ramped up in the Chinese scientific community, with researchers racing against time to formulate a detailed profile of the virus and screen treatments.

On Thursday, the Chinese Academy of Sciences (CAS) announced it would provide Chinese researchers with open and free access to the China Science and Technology Cloud (CSTC) in 2019-nCoV research.

The CSTC draws data from the academy's research institutes and major scientific installations, as well as many of China's top universities and private innovation centers.

According to the CAS, Chinese researchers in virus transmission and detection, as well as drug and vaccine development, will have free access to all CSTC resources and services, such as high-performance computing, software and video web conferencing for up to 100 people.

The 2019-nCoV belongs to a group of enveloped, single-stranded RNA viruses. The three-dimensional structure of the virus is critical to its stability and function.

Scientists from Baidu Research said the LinearFold algorithm can shorten the time for predicting the secondary structure of the 2019-nCoV from 55 minutes to 27 seconds, speeding up the process of understanding the virus and screening compounds to treat the disease.

Sun Xuejun, a researcher from the Second Military Medical University, said that a major strategy to develop a new antiviral drug is to look for inhibitors for virus replication.

The search can be carried out through testing the current broad-spectrum antiviral drugs and screening possible therapeutic compounds in databases.

On Sunday, researchers from Shanghai Tech University revealed the high-resolution crystal structure of the viral main proteinase, which controls the activities of the 2019-nCoV replication complex and is taken as a potential target for therapy.

The researchers screened marketed drugs as well as databases for high potency compounds and for compounds from medicinal plants.

A total of 30 candidates were selected, 12 of which are anti-HIV drugs.

On Wednesday, Shenzhen health officials announced that the city has launched clinical trials for the anti-HIV drug Aluvia and broad-spectrum antiviral drug Favipiravir, to test their effects on the 2019-nCoV.

Sun also pointed out that another approach could be blocking the receptor on the host cell surface.

Previous studies found that ACE2 is a type of enzyme receptor for the SARS coronavirus (SARS-CoV). It is expressed in the outer layer tissue of human airways and functional tissue in the lungs.

Earlier this month, Chinese researchers found that the ACE2 receptor also plays a key role in the 2019-nCoV's interaction with human cells.

Targeting the ACE2 receptor, researchers from Peking University said they have selected several candidates for treating the 2019-nCoV by screening 2,674 medicines in the market and 1,500 herbal extracts.

Ammonia bromine, known as Mucosolvan, a respiratory lubrication phlegm medicine that is commonly used in acute and chronic bronchitis, is among the selected candidates. The researchers said they planned to start testing the candidate medicines at molecular levels as soon as possible. (Xinhua) 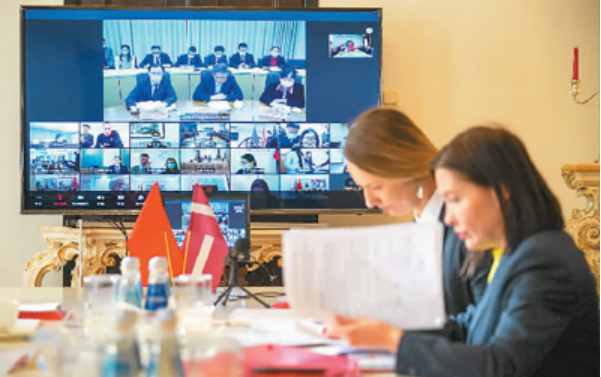 Chinese scientists have shared scientific data related to the novel coronavirus with the world and will seek more international cooperation. With the epidemic now entering a mitigation phase in China, they plan to hold seminars to communicate with international institutio...

Chinese researchers have found that anti-malaria drug chloroquine can effectively inhibit the novel coronavirus infection in vitro. Researchers from the Wuhan Institute of Virology under the Chinese Academy of Sciences and the Beijing Institute of Pharmacology and Toxicol...