The Second Glacier Inventory of China (SGI-China) was formally released by the Cold and Arid Region Environmental and Engineering Research Institute of the Chinese Academy of Sciences (CAREERI) in Beijing on Dec. 13. It updates an earlier inventory completed in 2002.

As the most sensitive and longest indicator and proxy for climate change, glacial change information is regarded as the most important data resource in the study of global change. China is the middle latitude country with the largest glacial area in the world. It has the largest glacial area of any place in the world besides Antarctica and Greenland. As a result, information on China’s glaciers has great significance for the development of China’s cryospheric research as well as the worldwide study of global and planetary change. Investigation of glacial distribution and glacial change is also very important to the evaluation of water resources in the region and building western China’s national defense infrastructure.

Due to the significant impact of global warming on glaciers in western China, the outdated FGI-China can no longer meet the urgent demands of various social and economic fields for current information about glacial distribution.

SGI-China provides updated information on the distribution of Chinese glaciers. It was produced with support from a MOST (Ministry of Science and Technology) project entitled “The Investigation of Glaciers and Their Changes in Western China.” This glacier inventory was compiled based on Landsat TM and ETM+ images acquired between 2006 and 2010, and used widely applied methods to delineate glacial outlines and calculate the parameters of glaciers. By the end of 2013, the glacier inventory for 86 percent of the glaciated area in western China had been compiled. The remaining areas are mainly located in the southeastern Tibetan Plateau, where no good quality Landsat images without snow and cloud cover could be acquired due to the intense influence of the South Asian monsoon in this region. To counter this problem, the newly released dataset uses some digitized FGI-China data as a substitute for the missing data. These FGI-China data include information on 6,201glaciers with a total area of 8,753 km2.

According to the newly released Chinese glacier inventory, there are 48,571 glaciers with a total area of 51,840 km2 in western China, with estimated water storage of 4,494km3. About 90 percent of the glacier area in SGI-China falls within the Tibetan and Xinjiang autonomous regions, while 30 percent and 34 percent fall within the drainage basins of the Yarlung Zangbo River and the Tarim River, respectively.

By comparing the finished parts of the new SGI-China and the digitized FGI-China, CAREERI scientists have produced a draft illustration of glacial change in western China. During the last 30-50 years, a total of about 18 percent of China’s glaciers have vanished. The biggest area of glacial shrinkage has occurred in the Altai and Gangdise Mountains, with reductions of 37.2 percent and 32.7 percent, respectively. The Karakorum, Altun and Kunlun Mountains, along with the Qiangtang Plateau, have the lowest shrinkage (11.3 percent to 8.4 percent). Glacial shrinkage in other mountain ranges was moderate (27.2 percent to 21 percent). The distribution of annual glacial change also shows similar spatial patterns. The Qiangtang Plateau shows the smallest rate of glacial shrinkage (about 0.2 percent/a), while the regions in the Gangdise Mountains and the adjacent north slope of the Himalaya Mountains, and the source region of the Indus River around the western Himalayas, show the largest rate of glacial shrinkage (about 2.2 percent/a). Moderate glacial change is mainly distributed in the Tianshan and Qilian Mountains and the northern Tibetan Plateau.

The SGI-China dataset has now been uploaded to the Cold and Arid Region Science Data Center in Lanzhou. The center provides data services for building western China’s national defense infrastructure, as well as for land investigation in Gansu Province, and for several large national scientific research projects. The SGI-China dataset has great potential for wide usage, due to the rapid development of the economy of western China and the growing demand for updated glacier inventory data by many research projects.

Fig. 1. Location of the studied site (Image by CAREERI)

How Are Distribution Patterns and Conservation Planning of Woody Species Diversity in Xinjiang?

Prof. ZHANG Mingli and ZHANG Hongxiang selected the Xinjiang as the study area to investigate the patterns of woody species diversity and their relationships with environmental factors. A total of 133 woody forest species and 220 woody xerophytic species were sampled in t... 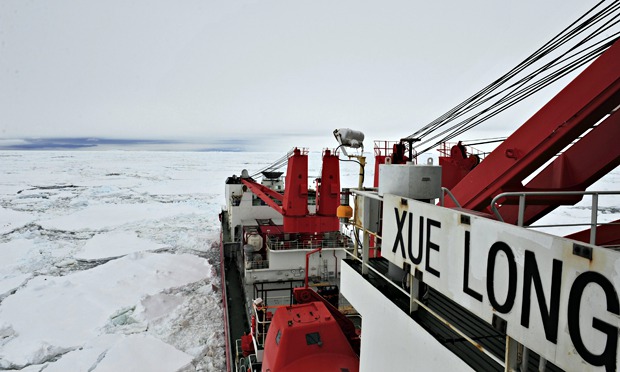 Just a few days ago, the Chinese Academy of Sciences hosted a small workshop which involved scientists from around the world that work on a device called the Expendable Bathythermograph, or XBT for short. The obscurity of the conference speaks volumes; it didn't get much,...