A file photo shows the Shanghai Synchrotron Radiation Facility (SSRF) project that was put into service on Jan. 19, 2010. (Photo/shb.cas.cn)

The Chinese Academy of Sciences will support more labs and major projects in frontier sciences, expand international collaboration with other countries and share its data and solutions via more robust and open cloud-based platforms this year, senior scientists said on Friday.

Moreover, it will spend another 2.7 billion yuan to build 11 scientific and educational facilities in the districts. All of these projects had been launched by the end of last year, Bai said. The academy will also build new labs in Shanghai, Hefei in Anhui province, the Xiongan New Area in Hebei province and the Guangdong-Hong Kong-Macao Greater Bay Area.

"This year is a momentous year for China in eliminating poverty to build a moderately prosperous society," Bai said. "For CAS, this year marks the end of the first phase of the Pioneering Initiative, so it is a year to review the past and prepare for the future."

In 2013, President Xi Jinping asked the academy to be a pioneer in four major areas-making great scientific and technological progress, producing more innovative talent and becoming an influential scientific think tank for China as well as a world-class research institution. The Pioneering Initiative was launched a year later consisting of plans and reforms to meet Xi's four expectations by 2030.

"Our priorities this year will focus on further improving our research capabilities and producing original breakthroughs in basic research," Bai said, adding that more capable State laboratories, advanced research projects and open sharing platforms will be instrumental in fulfilling these goals.

By the end of last year, the academy had launched 58 pilot projects in fields such as space technology, green industry and regenerative medicine, said Xiang Libin, the academy's vice-president responsible for managing these projects. "These projects not only are crucial for producing globally influential breakthroughs, they are also closely related to our societal well-being," he said.

In terms of international collaboration, the academy has signed institutional-level cooperation agreements with 174 foreign institutions from 61 countries. Around 4,000 foreign scientists, as well as 1,600 graduate students, are currently visiting, working or studying at the academy, said Zhang Yaping, the academy's vice-president responsible for global cooperation.

Zhang said the Chinese academy has made considerable breakthroughs with scientifically developed countries last year. For example, the Academy of Sciences Leopoldina in Germany signed a declaration with CAS, its first supporting basic scientific research with a foreign academy since its founding in 1652.

China-US scientific cooperation on the government level has stagnated due to friction between the countries, but on the academic and civilian levels, such collaboration is alive and well, Zhang added.

"More and more American scientists are beginning to realize that sustained dialogue and cooperation with Chinese peers will benefit both countries in the long run," he said. "I believe the two scientific communities from both countries have the wisdom and capability to address current challenges and continue to contribute to the betterment of mankind."

Chinese scientists have also offered their expertise and equipment to provide safe drinking water to around 4,000 villagers and 1,300 students in Sri Lanka. Disaster mitigation, environmental protection, food safety and public health are some of the top fields for international cooperation, Zhang said.

Li Shushen, CAS's vice-president, said the academy has launched a new version of its scientific cloud database and it is open for researchers around the world to use its plethora of features, including cloud calculation, data search and storage, analytical software and community networking.

The network includes scientific data on energy, oceanography, biosciences, health and other frontier and interdisciplinary fields, according to Li.

"It is a cloud service by the scientists, so they can promote open and global cooperation," Li said. (China Daily)

【Science】Network for Safe and Secure Labs

The current outbreak of Ebola virus in the Democratic Republic of the Congo is a reminder that dangerous diseases exist in many corners of the world and that they can cause substantial human suffering and financial devastation locally and internationally. In response, ins... 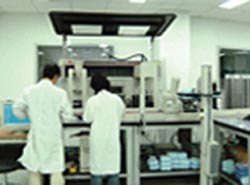 Engineering lab for herbal medicine standardization to be established in Shanghai