Chinese President Xi Jinping, also general secretary of the Communist Party of China (CPC) Central Committee and chairman of the Central Military Commission, presents China's top science award to Huang Xuhua (R) and Zeng Qingcun (L) during an annual ceremony to honor distinguished scientists, engineers and research achievements at the Great Hall of the People in Beijing, capital of China, Jan. 10, 2020. Huang Xuhua is an academician of the Chinese Academy of Engineering who worked at a research institute of the former China Shipbuilding Industry Corporation, and Zeng Qingcun is a famous meteorologist from the Institute of Atmospheric Physics under the Chinese Academy of Sciences (CAS). (Xinhua/Li Xueren)

Xi, also general secretary of the Communist Party of China (CPC) Central Committee and chairman of the Central Military Commission, granted award medals and certificates to them at an annual ceremony held in Beijing to honor distinguished scientists, engineers and research achievements.

Xi shook hands with them and expressed congratulations.

Other leaders, including Li Keqiang, Wang Huning and Han Zheng, were also present.

Huang Xuhua, an academician of the Chinese Academy of Engineering, is the chief designer of the country's first-generation nuclear submarines.

Born in Guangdong Province in 1926, Huang later joined a research institute of the former China Shipbuilding Industry Corporation and has been engaged in the research and development of nuclear submarines for about 30 years. He won the Medal of the Republic in 2019 for his outstanding contributions to the nation.

Chinese President Xi Jinping, also general secretary of the Communist Party of China (CPC) Central Committee and chairman of the Central Military Commission, presents the award to China's top science award winner Zeng Qingcun during an annual ceremony to honor distinguished scientists, engineers and research achievements at the Great Hall of the People in Beijing, capital of China, Jan. 10, 2020. Zeng Qingcun is a famous meteorologist from the Institute of Atmospheric Physics under the Chinese Academy of Sciences (CAS). (Xinhua/Li Xueren)

Zeng Qingcun, 85, is a famous meteorologist from the Institute of Atmospheric Physics under the Chinese Academy of Sciences (CAS).

Zeng's visionary study on global climate change has brought him a host of accolades and international acclaim, including the world's top prize for meteorological work.

On behalf of the CPC Central Committee and the State Council, Premier Li Keqiang extended congratulations to award winners and thanked foreign experts for their support of China's science and technology development.

Li, also a member of the Standing Committee of the Political Bureau of the CPC Central Committee, said that since the founding of the People's Republic of China, the country has made brilliant achievements in scientific and technological development, with the past year witnessing a number of internationally leading advances.

Li noted that China is striving to achieve the first centenary goal of building a moderately prosperous society in all respects in 2020.

The premier stressed the importance of following the guidance of Xi Jinping Thought on Socialism with Chinese Characteristics for a New Era, further implementing the innovation-driven development strategy and accelerating the in-depth integration of science and technology with the economy, in a bid to maintain the economic growth within a reasonable range and promote the high-quality development.

He called for the strengthening of basic research as the foundation of sci-tech innovation.

"We will increase financial support and guide social forces including enterprises to increase investment," Li said, adding that the mechanisms for ensuring funds, evaluating achievements and rewarding talent shall all be optimized.

China will support researchers in concentrating on their work without distractions and create more original achievements by respecting rules and tolerating failures, Li said.

Those who dedicated themselves to the scientific work despite decades of obscurity shall be commended and awarded, he said.

The premier also stressed that sci-tech innovation shall address the urgent needs of economic development and people's livelihood.

China will accelerate the development of key technologies and transforming research achievements to products to help speed up industrial upgrading, he said.

Research and development shall be intensified in major disease prevention and control as well as environmental management so that more people will directly benefit from technology and innovation, he said.

The premier emphasized the role of enterprises in technological innovation and called for efforts to improve their ability and willingness to invest more in innovation by implementing tax and fee deduction policies as well as respecting and protecting their intellectual property rights.

To expand international cooperation in innovation, Li pledged to facilitate scientists and technicians as well as enterprises from various countries to come to China for exchanges and development.

Vice Premier Han Zheng, also a member of the Standing Committee of the Political Bureau of the CPC Central Committee, presided over the ceremony, with about 3,300 people attending.

Before the ceremony, Xi and other leaders met representatives of the award winners.

This year's ceremony highlighted major breakthroughs in basic research. Chemist Zhou Qilin, 63, and his team won the first-place prize of the State Natural Science Award for inventing a highly effective catalyst that has been widely used by giant pharmaceutical companies in drug production.

Other research programs that were presented with the State Natural Science Award included studies on topological quantum materials, iron-based superconductors as well as the controllable growth and performance regulation of graphene.

"Many perplexing problems look like technological ones. In fact, they are not backed by solid basic research. With no clear understanding of basic science problems, you cannot get original results," said Zhou.

A batch of key technologies for industrial applications, such as the jetliner ARJ21 project, were also honored.

Other awarded technologies applied in industries and large engineering projects included those for building large-scale tunnels and ensuring highway safety in geographically complicated and dangerous mountain areas, as well as for the automatic transmission hybrid power system for commercial vehicles.

Awards were also given to animal studies, medical breakthroughs and agricultural technologies.

Wei Fuwen, a CAS academician, and his colleagues won the second-place prize of the State Natural Science Award, for their research on giant pandas.

They focused on the evolution of the ancient species and contributed to endangered species conservation.

Other award winners related to diseases included studies on cross-species infection of the animal influenza virus in humans as well as the new pathogenesis and treatment of depression. 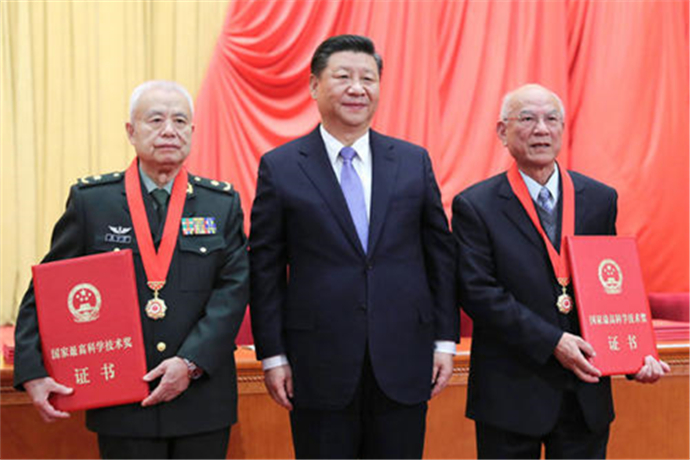 Scientists Recognized for Lifetime of Work

83-year-old LIU Yongtan is the founder of the country's new maritime radar system.