Scientists announced their achievement at a press conference in the Shanghai Institute for Advanced Studies of University of Science and Technology of China on Wednesday.

Recently, Chinese leading quantum physicist Pan Jianwei, an academician of the Chinese Academy of Sciences and his colleagues -- Lu Chaoyang and Zhu Xiaobo, of the University of Science and Technology of China, and Wang Haohua, of Zhejiang University -- set two international records in quantum control of the maximal numbers of entangled photonic quantum bits and entangled superconducting quantum bits.

The test results show the sampling rate of this prototype is at least 24,000 times faster than international counterparts, according to Pan's team.

At the same time, the prototype quantum computing machine is 10 to 100 times faster than the first electronic computer, ENIAC, and the first transistor computer, TRADIC, in running the classical algorithm, Pan said. 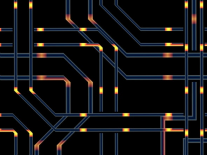 In the race to create a quantum computer that can outperform a classical one, a method using particles of light (photons) has taken a promising step forward. PAN Jianwei and LU Chaoyang, both at the University of Science and Technology of China, and their colleagues impro...