China launches the world's first quantum satellite on top of a Long March-2D rocket from the Jiuquan Satellite Launch Center in Jiuquan, northwest China's Gansu Province, Aug. 16, 2016. The world's first quantum communication satellite, which China is preparing to launch, has been given the moniker "Micius," after a fifth century B.C. Chinese scientist, the Chinese Academy of Sciences (CAS) announced Monday. (Xinhua/Jin Liwang)

In a cloud of thick smoke, the satellite, Quantum Experiments at Space Scale (QUESS), roared into the dark sky on top of a Long March-2D rocket.

The 600-plus-kilogram satellite will circle the Earth once every 90 minutes after it enters a sun-synchronous orbit at an altitude of 500 kilometers.

It is nicknamed "Micius," after a fifth century B.C. Chinese philosopher and scientist who has been credited as the first one in human history conducting optical experiments.

In its two-year mission, QUESS is designed to establish "hack-proof" quantum communications by transmitting uncrackable keys from space to the ground, and provide insights into the strangest phenomenon in quantum physics -- quantum entanglement.

Quantum communication boasts ultra-high security as a quantum photon can neither be separated nor duplicated. It is hence impossible to wiretap, intercept or crack the information transmitted through it.

With the help of the new satellite, scientists will be able to test quantum key distribution between the satellite and ground stations, and conduct secure quantum communications between Beijing and Xinjiang's Urumqi.

QUESS, as planned, will also beam entangled photons to two earth stations, 1,200 kilometers apart, in a move to test quantum entanglement over a greater distance, as well as test quantum teleportation between a ground station in Ali, Tibet, and itself.

"The newly-launched satellite marks a transition in China's role -- from a follower in classic information technology (IT) development to one of the leaders guiding future IT achievements," said Pan Jianwei, chief scientist of QUESS project with the Chinese Academy of Sciences (CAS).

The scientists now are expecting quantum communications to fundamentally change human development in the next two or three decades, as there are enormous prospects for applying the new generation of communication in fields like defense, military and finance.

China launches the world's first quantum satellite on top of a Long March-2D rocket from the Jiuquan Satellite Launch Center in Jiuquan, northwest China's Gansu Province, Aug. 16, 2016. The world's first quantum communication satellite, which China is preparing to launch, has been given the moniker "Micius," after a fifth century B.C. Chinese scientist, the Chinese Academy of Sciences (CAS) announced Monday. (Xinhua/Jin Liwang)

Quantum physics is the study of the basic building blocks of the world at a scale smaller than atoms. These tiny particles behave in a way that could overturn assumptions of how the world works.

One of the strange properties of quantum physics is that a tiny particle acts as if it's simultaneously in two locations -- a phenomenon known as "superposition." The noted interpretation is the thought experiment of Schrodinger's cat -- a scenario that presents a cat that may be simultaneously both alive and dead.

If that doesn't sound strange enough, quantum physics has another phenomenon which is so confounded that Albert Einstein described as "spooky action at a distance" in 1948.

Scientists found that when two entangled particles are separated, one particle can somehow affect the action of the far-off twin at a speed faster than light.

Scientists liken it to two pieces of paper that are distant from each other: if you write on one, the other immediately shows your writing.

In the quantum entanglement theory, this bizarre connection can happen even when the two particles are separated by the galaxy.

By harnessing quantum entanglement, the quantum key technology is used in quantum communications, ruling out the possibility of wiretapping and perfectly securing the communication.

A quantum key is formed by a string of random numbers generated between two communicating users to encode information. Once intercepted or measured, the quantum state of the key will change, and the information being intercepted will self-destruct.

According to Pan, scientists also plan to test quantum key distribution between QUESS and ground stations in Austria. Italy, Germany and Canada, as they have expressed willingness to cooperate with China in future development of quantum satellite constellations, said Pan.

With the development of quantum technology, quantum mechanics will change our lives in many ways. In addition to quantum communications, there are quantum computers that have also drawn attentions from scientists and governments worldwide.

Quantum computing could dwarf the processing power of today's supercomputers.

In normal silicon computer chips, data is rendered in one of two states: 0 or 1. However, in quantum computers, data could exist in both states simultaneously, holding exponentially more information.

One analogy to explain the concept of quantum computing is that it is like being able to read all the books in a library at the same time, whereas conventional computing is like having to read them one after another.

Scientists say that a quantum computer will take just 0.01 second to deal with a problem that costs Tianhe-2, one of the most powerful supercomputers in the world, 100 years to solve.

Many, however, is viewing this superpower as a threat: if large-scale quantum computers are ever built, they will be able to crack all existing information encryption systems, creating an enormous security headache one day.

Therefore, quantum communications will be needed to act like a "shield," protecting information from the "spear" of quantum computers, offering the new generation of cryptography that can be neither wiretapped nor decoded.

In past experiments, quantum communications could only be achieved in a short range, as quantum information, in principle, could travel no more than 500 kilometers through optical fibers on the land due to the loss of photons in transmission, Pan explained.

Since photons carrying information barely get scattered or absorbed when travelling through space and Earth's atmosphere, said Pan, transmitting photons between the satellite and ground stations will greatly broaden quantum communications'reach.

However, in quantum communications, an accurate transmission of photons between the "server" and the "receiver" is never easy to make, as the optic axis of the satellite must point precisely toward those of the telescopes in ground stations, said Zhu Zhencai, QUESS chief designer.

It requires an alignment system of the quantum satellite that is 10 times as accurate as that of an ordinary one and the detector on the ground can only catch one in every one million entangled photons fired, the scientist added.

What makes it much harder is that, at a speed of eight kilometers per second, the satellite flying over the earth could be continuously tracked by the ground station for merely a few minutes, scientists say.

"It will be like tossing a coin from a plane at 100,000 meters above the sea level exactly into the slot of a rotating piggy bank," said Wang Jianyu, QUESS project's chief commander.

Given the high sensitivity of QUESS, people could observe a match being lit on the moon from the Earth, Wang added.

After years of experimenting, Chinese scientists developed the world' s first-ever quantum satellite without any available reference to previous projects. Now they are waiting to see QUESS's performance in operation. 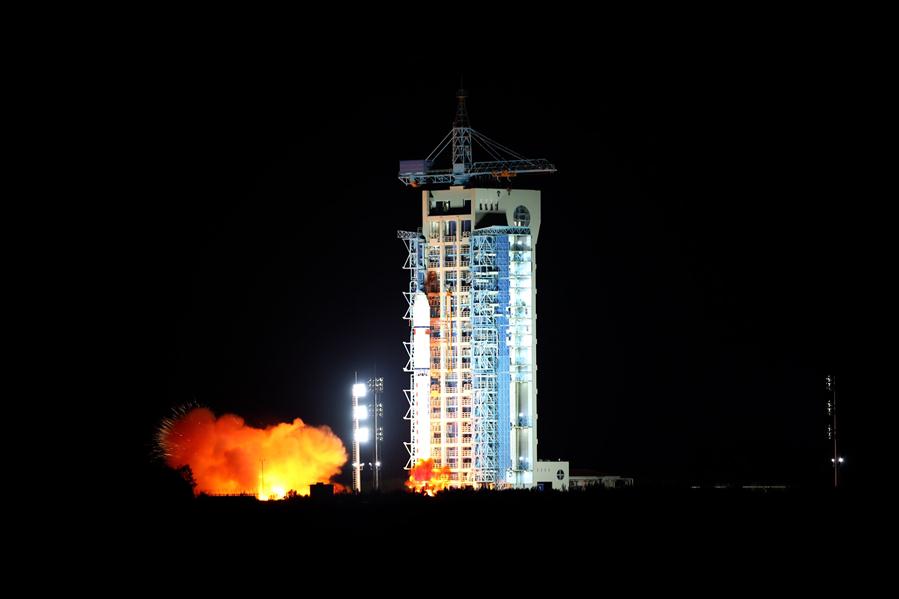 China's successful launch of the world's first quantum satellite was "very exciting" and can help conduct experiments that may lead to "much more secure" quantum communications, a U.S. quantum expert said. "The event is indeed very exciting and does carry global importanc...